A Question of Black Liquidity 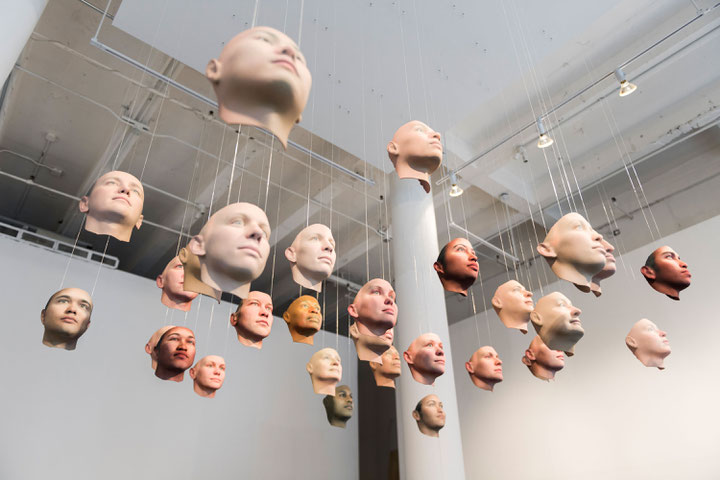 ‘Face Value’ marked an intersectional turn for Transmediale, Berlin’s premier festival of media arts and digital culture, with a program poised to address relations of class, gender and race built into media and technology systems.
In the first of the festival’s keynote lectures, feminist postcolonial scholar Françoise Vergès elaborated on her recent text about the ‘Racial Capitalocene,’1 drawing on the work of influential Black thinker Cedric J. Robinson. Robinson’s critique of capitalism’s appropriation of Black labor power as ‘constant capital’2 was picked up by Jonathan Beller in his keynote, ‘Derivative Living,’ the following night. Alongside Lisa Nakamura, another keynote speaker at this year’s Transmediale, and Wendy Hui Kyong Chun who featured at the festival last year, their work announces a field of critical race media theory.
Beller’s mostly pessimistic analysis of life under a regime of ‘computational racial capitalism’ recalls Robinson’s findings that capitalism arose from conditions that were already racializing the peoples of feudal Europe. These modes of differentiation expanded with European colonialism, leading to the ‘obligatory’ development of the negro slave, whose labor power was necessary for the emergent world economy.
The racialized character of labor remains, most obviously as structural global inequalities continue to produce differentials in globalized labor markets, and thus supply ‘cheap labor’ in the former colonized parts of the world. More recently, forms of immaterial labor and communicative capitalism have flourished in the wake of social media which has come to dominate our modes of representation. Beller notes that platforms such as Facebook, have established a distributed means of production that exploit our affective, attentional and metabolic capacities as ‘deterritorialized factories’ and he is critical of such processes of ‘digitization’ which often operate under the guise of digital culture.
Record keeping is historically a racializing, gendering and class-defining process of differentiation; of classifying people as quantities, statistics, resources and assets. Information is not value-neutral, nor are the media-technological formations by which it is analyzed, circulated and proliferated independent of ideology. ‘Colonialism merely gives way to computational colonialism,’ is how Beller describes the simultaneous processes of ‘informationization, computerization and financialization’ undertaken by platforms which are intensified by the centralization of information with supranational media-technology corporations such as Google and Facebook, and the concentration of financial power with banks and states. Echoing Robinson, he claims all of us are rendered as fixed capital by a totalizing system of computational capitalism.
Surprisingly, Beller glimpses some potential for emancipation in recent experiments with these very processes, in particular the activities of the Economic Space Agency (ECSA)[3[, a start-up of sorts developing alternative finance on the blockchain-based platform Ethereum4. Blockchain, an innovation of the pioneering cryptocurrency Bitcoin, is a ‘trustless’ computational means of validating and securing transactions on a public ledger that is relayed across a network, removing the need for a centralizing authority like a bank. Ethereum is effectively the first blockchain-based distributed computing operating system, enabling developers to build applications for it that make use of smart-contracts – digital protocols which execute and enforce agreed-upon tasks, and that are arguably more secure in guaranteeing transactions than methods vulnerable to human foibles. Without recourse to an overseeing authority, on Ethereum there is an opportunity to ‘open-source finance.’ ECSA’s ‘space program’ proposes to do this by facilitating the ‘interoperation of a plurality of micro-economies’ in new economic space. Participating ‘econauts’ would determine their own terms of value creation, issue tokens or cryptocurrencies to leverage their activities and engage in trade to support other like-minded communities. Making use of ubiquitous computing ‘everyday people’ could take control of their financialization and thus according to ECSA, ‘the design of economic space becomes a means of collective self-expression.’5
‘Don’t take things at face value,’ cautioned Transmediale’s artistic director Kristoffer Gansing at the festival press preview. So it would be prudent to consider who stands to profit from developments in speculative computational finance. Legal scholar Robert Herian warns us to be wary of those using technological innovation to mask motives that differ from those whom they claim it will benefit.6 For entrepreneurs, the attraction of ‘disruptive’ technologies such as blockchain lies in their capacity to open up new markets and competition, and technological innovation is a means to gain advantages over competitors. Contrary to the dream of decentralization and diversity, market success tends towards the consolidation of power and economic monopolization, so Herian argues, rather than usurp the status quo, disruption in markets is most often ‘radically conservative.’
Cedric Robinson reminds us that the foundational figure of capitalism’s world system was not the worker but the slave. The profit motive implies that many of those who participate in liquidity and trade simply want to get rich, so would not those who come to power in alternative economies reproduce the same violence on which capitalism is predicated? Might the self-financialization of social activism, as Beller suggests with the example of Black Lives Matter, deepen the dynamics of the gig economy which commandeers self-expression as market differentiation, as social competition and ultimately unfreedom? As one respondent from the audience pointedly asked: ‘Where does the Black body enter into cryptocurrency other than being a client in jail?’7
Such anxieties underpinned several discussions at Transmediale that were attentive to who was enabled to speak and who was privileged enough to attend. Undoubtedly these concerns trouble all of us ‘non-Blacks’ engaged with Black thought. I am taken by the writing of another festival participant Aria Dean, whose ‘Notes on Blacceleration’8 locates a strain of radical Black thinking which mobilizes and accelerates Black peoples’ long history as living capital and speculative value; as those historically cast as sub-human re-make themselves as inhuman, counter-human and anti-human in their efforts to move with, through and beyond capitalism’s modes of repression and alienation. Learning from these histories and practices, we might be reminded in our attempts to wrest control of derivative living that social life need not be a competition, lest it become yet another race to the bottom.